It is fair to say that Super Spade are not one of the giants when it comes to the online casino industry. There will be some people out there who have never played a game of theirs, but if you are in a specific area, then you are likely to have either seen or played their games before.

They don’t offer too many titles, and every one that they do offer is a live game, played inside a studio with a live dealer running the action. What they do offer, which is where they are at their most popular, is Asian inspired games, and that includes Indian games.

They offer a really strong Asian collection, covering games that are popular in the region but not popular anywhere else, as well as some hugely popular classics from all over the world.

Coming onto the market in 2016, Super Spade Games are not as experienced as some companies out there in the industry, but they now do have enough experience to understand what players want and how to get their name in front of more people.

Despite offering many games that focus on the Asian market, Super Spade are based in Europe and they run their game studios in Europe too. They are all about quality, so if you log on and play one of their titles you should get a feel for that while you are playing. Check out 9Winz for all the best Super Spade titles.

The company pushes hard when it comes to mobile gaming, something we have certainly seen from them in recent years. This is where the future lies, and Super Spade seem interested in being one of the front runners.

Their games are innovative, offering something a little different to many other companies, who stick solely with games that are popular all over the world and not regional favourites.

As mentioned, Super Spade are a company that focuses on games that are popular with Asian players. This is great news for Indian players, and you will see some all-time classics as part of their service that Indian players love. They focus on these, despite not being very popular elsewhere, showing just how much value they place on the Indian market.

Games such as Andar Bahar, Teen Patti and Dragon Tiger all feature in their list of games, this is a company that likes Indian and Asian games and they want to showcase as many of those as possible.

Of course, this would not be a live casino service without offering the classics such as roulette, blackjack and poker, these are also included as part of their service. It doesn’t matter where you are and what market you are focusing on, these games are always going to prove to be popular with players.

As we have already mentioned, the service on offer from Super Spade is not huge and they only have a total of eight games available at the moment. The main reason for such a small number is because they do not offer any type of gaming other than live gaming, those with bigger collections are usually bulked out by slot games, Super Spade don’t have those.

By offering just eight titles, you know that each game has been carefully created and every effort is put in to make sure the game works perfectly and stands out as being a good option for players.

But of those eight, which game is the very best they have on offer? Here are our top three picks from Super Spade.

A true classic around the world and a game that is played by millions both online and in casinos. Roulette is the biggest game that Super Spade offer in terms of global popularity and in some ways it is at the heart of their service.

Indian players, just like those from elsewhere, love roulette and the dealers who play on this game are kept busy by those and others.

Teen Patti originated in India and has gone on to become a hugely popular game both in India but also in Asia in general. Many people love playing this, and if you are playing inside a casino that specifically caters for this area then you are going to find Teen Patti as part of the service on offer.

One of the reasons why this game is so popular is because it is so simple to follow and play, something that Super Spade have ensured remains in their version. This is a very simple game, made even easier by the expert dealers that help you through the hands.

New casino players might like to try out Teen Patti games at Jungle Raja and receive a free ₹500 for doing so – no deposit is required.

Every Indian gambler knows and loves Andar Bahar so it makes sense for this to be our pick at number one from the games that Super Spade offer. This version of the game is a speed version of the game, so expect a fast-paced element to the game, which only makes this even better to play. 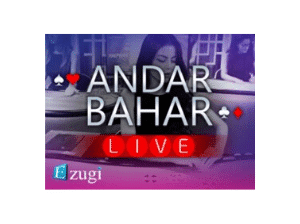 The rules are simple, the game requires little skill but a lot of luck, and if you want to relax then there are few better games you can choose than Andar Bahar as an Indian player.

Of the games on offer from Super Spade, we have picked out their version of Andar Bahar as the number one on offer.

The service at Super Spade is only small, but it is full of high-quality games. They want things to be perfect and strive to bring that to their customers, and we think they have done a great job in doing so.

Their games are either ones that are hugely popular around the world or ones that are popular with people from India, or generally the Asian market. This is a clear sign that they are targeting this market and if any new games come from them in the future then it would be no surprise to see more for this market.

The service is strong, and built on top quality gaming.